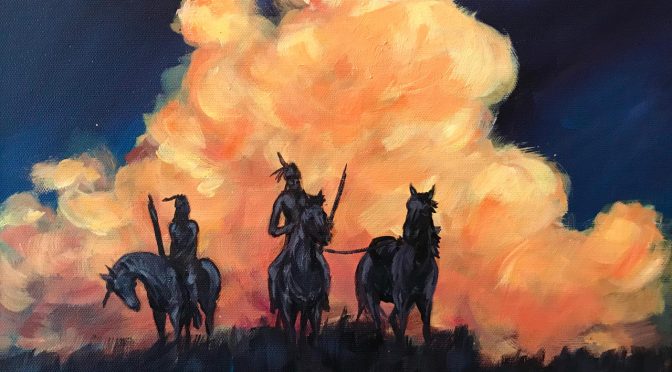 When I read a book that is exceptionally good I always try to define what makes it so different than the other novels. Cormac McCarthy’s “Blood Meridian” is one of those books that made me think about why I like it so much better than the rest of the books in my personal library.

Thinking about that, I came up with this theory:

History books seem to be studying the history in a way that makes us perceive the past events as a sequence of images, a film, a fiction that started and ended before we were born. And now we live somehow disconnected on an existential level from this events. After getting out of high school most of the people won’t be joining history classes ever again. For them everything that has been learned from history remains in their heads as a myth, a concise explanation of the world before them. At least that’s how I felt. I guess most of the people do too.

The way of the world is to bloom and to flower and die but in the affairs of men there is no waning and the noon of his expression signals the onset of night. His spirit is exhausted at the peak of its achievement. His meridian is at once his darkening and the evening of his day.

Reading “Blood Meridian” is extremely enlightening experience. It is a book that for the first time since high school made me rethink the events of the history It made me grasp the reflection of these even on the modern world and make me wonder where I want to go tomorrow. Not as an individual, but as a part of a collective, the collective of human kind.

“Blood Meridian” follows the stories of couple of characters. They are moving constantly from point A to point B to point C, etc. in the hear of America. At a certain point I started to perceive this movement not so much as a physical one, but as a metamorphic journey through the pages of history. I love it when an author gives you the right to choose how to interpret history. Cormac McCarthy does this with “Blood Meridian”.

Aside of the fact that “Blood Meridian” is a book that tell’s the history of the world in a new way, it is non the less a book that is built over the concept of the enemy. This concept let me to some very interesting questions, that I’d really like to find other reads to explore additionally. If the evolution of our species, accompanied by violence for survival, has a deep imprint on our DNA, can this explain the path the humanity took on over the ages? Is survival the one and only explanation of the bad things the human kind did? Can we learn from our behavior and not repeat it?

The truth about the world, he said, is that anything is possible. Had you not seen it all from birth and thereby bled it of its strangeness it would appear to you for what it is, a hat trick in a medicine show, a fevered dream, a trance bepopulate with chimeras having neither analogue nor precedent, an itinerant carnival, a migratory tentshow whose ultimate destination after many a pitch in many a mudded field is unspeakable and calamitous beyond reckoning.

Somewhere on the internet I read that someone defines McCarthy’s style as a neo-biblical rhetoric. Kill me if I know what this means. However, after finish this novel I have an idea: today we all share a common perception of the biblical mythology, written 2000 years ago. We are all aware of the myths of Moses, the Savior, the Ressurection, etc. And these myths has shaped much of the modern society as we know it. “Blood Meridian” is a book that I imagine after another 2000 years would be the source that will shape the people of the future’s perception about today’s history. I’d really like to be alive then to see what kind of society the future will shape. Maybe this is the neo-biblical rhetoric. Who knows.

An important book. I will read it again.