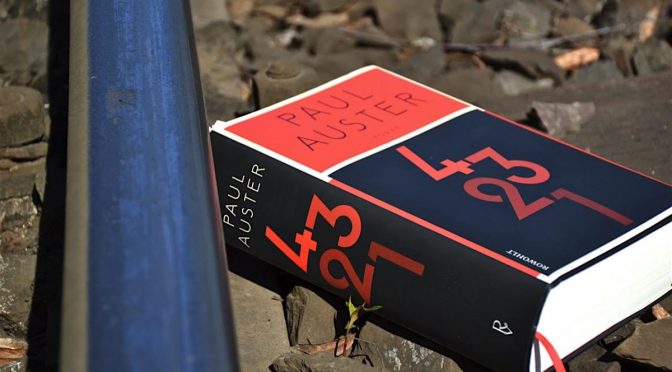 Once in an interview with Paul Auster I’ve read that thrpoughout his entire life everything has led him to the creation of the novel “4 3 2 1” – his magnum opus. After finishing reading the last page of the novel, I would say the same thing about myself – that everything I’ve read, watched, has done throughout my life has led me closer to the total immersion in “4 3 2 1”


The big event that rips through the heart of things and changes life for everyone, the unforgettable moment when something ends and something else begins. Was that what this was, he asked himself, a moment similar to the outbreak of war? No, not quite. War announces the beginning of a new reality, but nothing had begun today, a reality had ended, that was all, something had been subtracted from the world, and now there was a hole, a nothing where there had once been a something, as if every tree in the world had vanished, as if the very concept of tree or mountain had been erased from the human mind

The narrative follows couple of storylines and at the same time I would not say there was an unnecessary word in it. With every word the novel is getting bigger and bigger, the characters are growing on you and they are no longer just a product of your imagination, but it feels like they come to life in front of your eyes. This kind of books I always say are “exceptional”.

His mother’s name was Rose, and when he was big enough to tie his shoes and stop wetting the bed, he was going to marry her.

World War II, Korean War, Kennedy’s presidency, Kennedy’s assassination, Lyndon Johnson, the Vietnam War, the Summer of Love, Charles Manson’s cult, Sharon Tate’s death, the student protests at Columbia University, the ethics in journalism, the lightening of the Pentagon secret papers that have accused the US government of lying about the Vietnam War since the 1950s, the redemption of the New York Times, the radicalism, the Black panthers, feminism, racism, terrorism, the shooting of Andy Warhol, Richard Nixon, the creativity at times when the world is burning.

If all of these listed events speak to the potential reader, I would bet he would be interested in immersing himself in the reality that created them, deconstructing it and probably experiencing the feelings that made me think about the meaning of the word masterpiece:

This is one my favorite contemporary novels.

the world as it was could never be more than a fraction of the world, for the real also consisted of what could have happened but didn’t, that one road was no better or worse than any other road, but the torment of being alive in a single body was that at any given moment you had to be on one road only, even though you could have been on another, traveling toward an altogether different place.